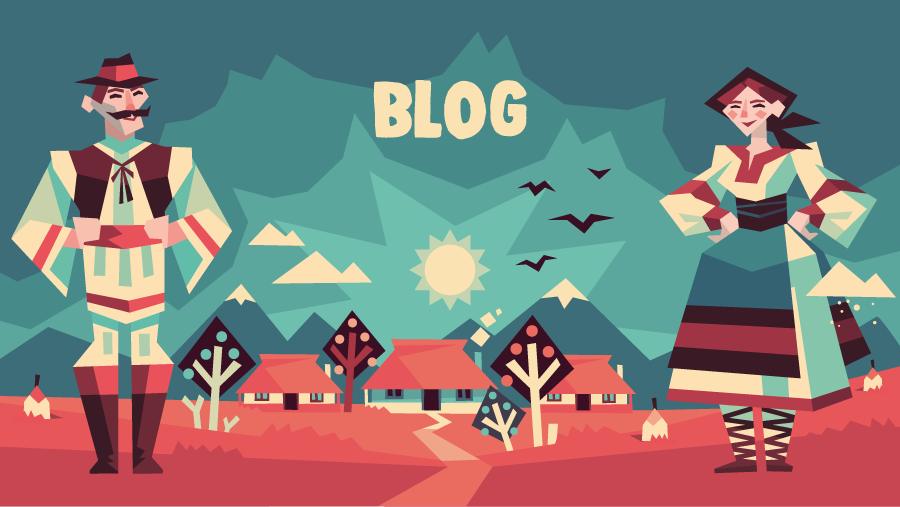 It has been a fantastic year. Our hilarious boardgame Zestrea is almost twelve months old and we are starting a terrifying but exciting adventure – releasing our baby to the world! We are Horațiu Roman, Alex Pațiu, Maria Surducan and Laura Bularca, and this is the story of how Zestrea began and why we think this game is worth making.

I am happy this is our first blog post, as I think it is filled with such good energy. This is Horațiu writing in first person singular, imagine that I telling you this story over a drink of your choice.

Alex and Horațiu, the early days

Alex and I met long time ago during high school years, going to cabins and parties in our hometown Cluj-Napoca, Romania. After I moved to Copenhagen, we hung out during the holidays when I visited the family. We always got along well because of our humor, and as old friendships go we didn’t think much about it.

Alex and I only made two small games before, at micro game jams with no name, organized ad-hoc on some weekends in 2016-2017. They were rooted in silly humor. The first one, devised with two other friends, was a card game about making longer and longer swear words in Romanian… That turned out too crude to pursue any further. The second was a virtual reality hammock experience, with a real hammock tracked in VR, but with not much to do except get scared by some cubes.

The story of Zestrea starts in September 2018 at Clujotronic – a technology, arts and games festival in Cluj-Napoca, Romania. I was part of the festival every year since 2016, exhibiting virtual reality games I made while part of VRUnicorns, and giving workshops about quick game design. I also took part in the Clujotronic Game Jam, where around 20-30 people, in small teams, made games over a weekend. Here I always tried to bring non-game-industry friends and get them hooked on this art.

In my first two editions, I managed to convince some friends to join, and we made a mobile game about building tall churches on top of each other in 2016, and an experimental game about playing piano to control airplanes in space in 2017. But those were jam games that never got past an early prototype stage.

Zestrea started as another funny jam game and it was more focused on survival than marriages. Alex and I had the game idea of marrying our children to avoid hunger – the villagers and the hard times were the main focus, with Zestre (dowry, the wedding inheritance of the bride) as an in-game resource used for negotiations as well as paying for food.

Neither Alex nor I have children. We haven’t been married. We know as much about marriage as we can guess from the good and the bad that our parents have been through. This made it so much more hilarious for us because we had no idea what we were doing, and just having a damn amazing time making crazy rules for the game.

After 24 hours, the game was a blast! So many people at the festival had great fun with it, that we ended up splitting the prototype to let more people play. The game went on into the night and – oh yeah – we got a prize from the jam organizers and we decided to use the money to print a couple more prototypes!

We played some more with friends over the next few days and received enlightening feedback, realizing the game needed to become more interactive and replayable. Alex had the bright idea to introduce Fate cards, which cause hilarious interactions between players and can be used strategically and intentionally, rather than relying on fun stuff happening by chance. We started streamlining the game in other areas too, wishing to make it more accessible and to play it more with our friends. Slowly the game was becoming a very in-depth project!

Fate cards were an instant hit, and we started having a small community of players in Cluj, where Alex went out all the time to play, and I was thirstily following the development from Copenhagen. By then we had not yet realized we should translate it to English, as our goal was always to make a good game for our Romanian friends. But we started thinking about it…

After playing for a couple of months, our social media went through a lucky crack in the internet and we were invited to BGCon -Zilele Jocurilor in Târgu Mureș, the most important board game festival in Romania, to showcase Zestrea. Alex went, had a fantastic time meeting amazing developers and making some new fans, and we had the validation we needed to know we should turn Zestrea into a real game.

After the BGCon festival we met in Cluj-Napoca for the winter holidays, and we started planning for the future. We made a new prototype for the art on the cards (in pixel-art, something which proved to be much harder than it first seemed). And then we headhunted…

Right after New Year’s 2019 in early January we met Maria Surducan, an independent illustrator and comic book writer from Cluj-Napoca. She and her sister Ileana had just launched a children’s comic book called Nor’s Holiday, and Maria was otherwise busy with a lot of other amazing projects (check them in her portfolio here)… but we loved their work and we met them to play Zestrea in a cafe, hoping to convince them that our game is worth collaborating on. It worked!

Maria joined the team and we were now three, and we started preparing the game with new art. It was a long process as we were all involved in multiple projects and travels, but we were driven by the excitement of everyone we showed the game to, and getting feedback that people wanted to play the game over and over. Alex and I translated it, and I started showing English version to friends in Copenhagen, and taking it with me in my travels to Iceland and Germany, and Sweden…

Feedback from non-Romanians resulted in more changes to the game, that made it more accessible, more inclusive and more positive. We got rid of cheap jokes and kept the hilarity through interactions – something that everyone can understand, no matter their background.

We evaluated the cultural potential of the game. If someone from outside Romania was going to play Zestrea, they should have an amazing experience and remember Romania not just for its silly traditions and sense of humor, but also for its humanity and struggle for good. This vision remained our goal – to make a great game for Romanians, as well as one that can be enjoyed by the global audience and showcase Romanian culture.

Laura and I met multiple times at Nordic Game Conference last few years, but this year in May she presented Valiant Games‘ newest episode of Pendula Swing, a sweet game about a retired dwarf adventurer lady, figuring out life in a jazzy 1920s-inspired fantasy metropolis. The game had a lovely vibe and I hung around their booth, enjoying the music and the game.

Laura and her colleague Anna were totally busy with meetings and their booth, but gave me some good ideas about how to move Zestrea further from a prototype to launch, and suggested we should run a Kickstarter campaign to help us find both the audience and the funding for the game. As we were chatting I could see Laura being super excited with the game, and I had the prototype with me, ready to play, but I was busy showing my other games, while they were busy with meetings and other stuff.

We found the chance to play Zestrea at the very end of the conference, in the hotel lobby, and we realized this can be an amazing collaboration. Having talked to the team beforehand, knowing that we need someone that knows more about business and marketing, I was glad to find Laura and we immediately shook on it and she was part of the team.

Fast forward through Gamescom (a big game conference/event in Köln, Germany in August), and a few more jazzy summer travels, we are ready to move forward with our adventure, out into the open, sharing more about the game and our process as we become ready.

All four of us are Romanians, living in three different countries and doing multiple projects, but as of September 2019, Alex and I are dedicating our efforts full-time to Zestrea, until launch, while Maria and Laura are doing their jobs while making other awesome projects. So far we have worked together remotely, while I traveled back and forth between Cluj and Copenhagen, and though we still hope to soon meet with the entire team and give you a proper greeting, here is a virtual hug from all of us and thanks for following our journey.

Thanks for reading thus far and if you support us and our game, please tell your friends, on the social media of your choice, and subscribe to our newsletter – so you can be the first to know about our Kickstarter launch!